In this website, I will post/talk about history related information. Ex. American History/ World History.

This page will currently be dedicated to American History and starting at 1492, the discovery of the Americas by Columbus. Furthermore, my resources and my information, will most likely come from A People's History of the United States, by Howard Zinn, if not, I will credit my sources. 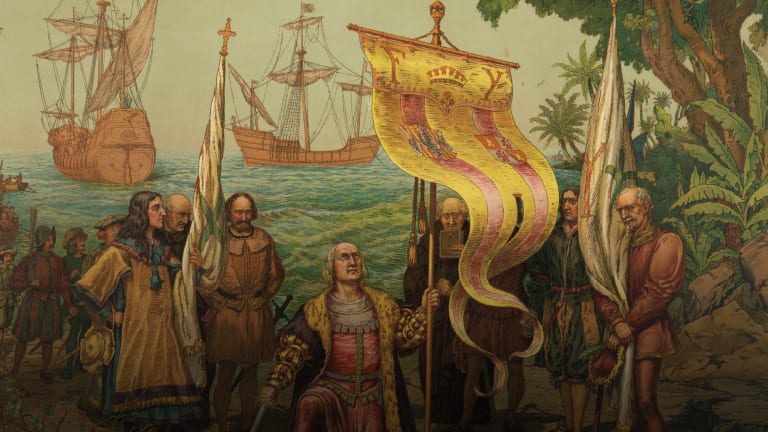 When Columbus was funded by the King of Spain to look for a path to asia west, his main objectives were the 3 R's; gold, glory and God. The trip to the americas was hard, rugid and difficult. Some men began to start a mutiny upon Columbus since they had found no land. But in the brim of day, one of Columbus' men spotted land and whoever spotted land first, would be rewarded, Columbus took this sailors reward and said that he had spotted land first. When Colmbus arrived at this land, it was called Hispanoila which present time is the Domincan Republic and Haiti. Columbus and his men were greeted by the Arawak Indians, they were kind, welcoming and civlized. These Arawak indians lived in village communes, had a developed agriculture of corn, yams, and cassava. They did not have any iron, work animals, but only had tiny gold ornaments in their ears. These ornaments were to have enourmous consequences. Some consequences were that Columbus had taken them aboard ships as prisoners because he insisted that they lead him to the gold. Columbus was not the amazing, kind man you learned about in your history books, he and his men had commited genocide upon the Arawaks and soon, America. The Arawaks had told Columbus where they had found the gold, in the rivers and panned. Columbus and his men took many hostage and Columbus soon had the Arawaks to gather a certain amount of gold for him, or else their arms would be cut off, and bleed to death. In addition, Columbus and his men saw that man and women were treated equal and no Patriarchy. This suprised many and realized how they did not care about being naked and suprised many as well. Columbus saw them as uncivilized and these Arawak prisoners were soon to be taken to Spain as slaves, but many died due to the crummy conditions. Since many viewed the Indians as uncivilized they were to be taken advantage of. Columbus had ordered his men to burn Arawak villages, playing with the children with their swords, cutting off the sexual organs of women and slaughtering men. They had raped and put the children and women upon labor. This was just one example of the cruelties upon the indians. This was just one instance such as this, it occured to the incas and the aztecs by Cortes and Pizarro. This is just a summary of Columbus' cruelties.